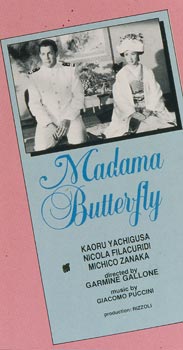 Pinkerton, a lieutenant in the American Marines, arrives at Nagasaki with the Navy. Here he meets a geisha of 15 called Cio-Cio-San (Butterfly), with whom he falls in love. Following the Japanese custom of that time, Pinkerton stipulates a marriage contract, valid only for a few weeks. The two lovers happily pass the time together, after which Pinkerton leaves, vaguely promising to return in spring. After some time, Butterfly has a baby from her affair with Pinkerton whom she still loves. She believes that their pseudo-marriage will still be valid and faithfully awaits the return of her lover. After three years Pinkerton returns but he has been married for a year to an American, Kate, who is with him. When Butterfly finds out the truth, she is not bitter against her lover nor against his wife, but she is so unhappy and her life seems so useless that she decides to kill herself, leaving her baby in the care of her lover.