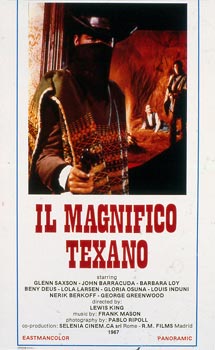 A gang of bandits burn down the Red House belonging to Pablo Lopez. The whole Lopez family is murdered except ten-year-old Manuel, who is scared for life by the horrifying sight of his dead parents and burning home. Fifteen years later, Manuel has grown up. After living through many adventures he returns to his village in disguise. Two things are on his mind: to find his long-loved Evelyn and to take revenge on her father, judge Wilkins, who was responsible for the slaughter at the Red House. Many scenes of high drama follow in which the characters seem to be willed by some supreme power and all the baddies are killed, including judge Wilkins. Evelyn dresses in mourning for her dead father but, because she has always disapproved of his behaviour, she is able to declare everlasting love to her Manuel.