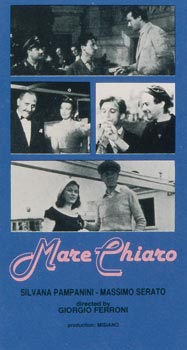 As a small boy, Luca escaped death and was rescued and brought up by a neapolitan family. One day he runs away to become a seaman, but returns to Naples for Lucia, the girl he's always loved. A very attractive girl who was the lover of the ship's captain has disembarked from the same boat he was on and has met Lucia's father, who is a wealthy widower, and has succeeded in marrying him. In the house of the newly-weds, Luca meets Lucia and feels the same old attraction for her; she, too, feels the same way about him so they decide to elope. But Lucia's stepmother is also attracted to Luca and tries to conquer him with her womanly wiles. Just in time, Luca comes to his senses and swears his love for Lucia alone. The perfidious woman makes an appointment with him and pulls a gun on him but stumbles and shoots herself instead. Luca is accused of the murder but succeeds in proving his innocence and marries Lucia.