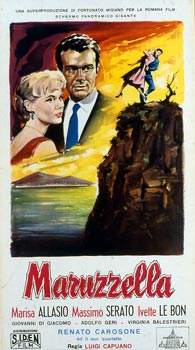 When girlish Maruzzella blossoms and becomes a beautiful young woman, the only person who does not seem to notice her in her prime is Salvatore, a man with whom she is desperately in love. However, determined not to moon around after him if he is not interested in her, Maruzzella, who is also very fond of music, forms a quartet, and under the guidance of a good impresario the group complete a successful tour. After a while, it becomes clear that Salvatore does in fact love Maruzzella, but he is just to shy to admit it. He is also involved with the young woman's step-mother, a beautiful woman but as hard as nails, who will not let him out of her grasp. However, the young lover's problems are solved when the step-mother finds another lover and releases her hold on Salvatore. He is now free to declare his love for Maruzzella which he has had to keep secret for such a long time.