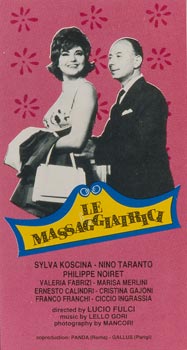 Parodi and Manzini, two milanese industrialists, are in Rome on a business trip. They are trying to clinch a deal with the president of the authority responsible for with juvenile delinquents to build a detention centre. So how on earth Marisa, one of three "masseuses", comes to be introduced to the president as Parodi's wife is a complete mystery. But whatever the reason, the arrival of the real Mrs. Parodi causes a considerable amount of confusion. Parodi has no need to worry on the president's account, though; he is an avid womanizer and is already paying his respects to the three "masseuses". However, when a police officer arrives, the president has to hide. The whole escapade is too much for him and his heart gives in. Getting rid of the corpse creates new problems and further excitement, but in the end everything sorts out. Whilst the police are tippedoff about the false "masseuses" they do not confuse them with their prime suspect, Bice - a real masseuse.