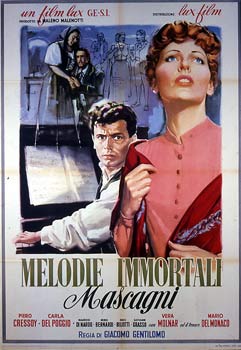 The film tells the difficult life of one of the greatest Italian composers: Pietro Mascagni. The poverty of his youth, the love for his wife Lina, the tragic death of his only child and his struggles to emerge in the competitive world of classical music. The sorrow for her son's death still fresh in her memory, Lina finds the strength to secretely send Mascagni's "Cavalleria Rusticana" to a local music contest... The composition is immediately considered a masterpiece and its first presentation is a true triumph!