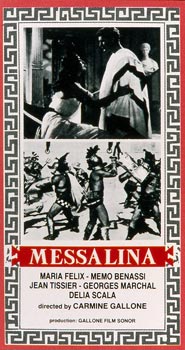 There is no end to what can be vile or degrading enough for Messalina, the wife of emperor Claudius; her life is a continuous orgy of eroticism, treachery and violence. Brave gladiator Valerio Asiatico is forced to kill himself as Messalina has arranged for him to be put to death. He hands the command of his company to Caio Silio, not knowing that the young warrior is Messalina's lover and that the two are planning to overthrow the emperor. However, Messalina is far too devious to be hatching only one plot at a time; she has just killed another of her lovers, and by doing so gains the confidence of another of her courtiers... or so she thinks. In fact, the latter is busy paving her way to ruin in order to avenge the death of his friends by Messalina. Meanwhile, Caio Silio is denounced by the company of the gladiators and Messalina, finding herself betrayed and deserted by everyone, finally kills herself.