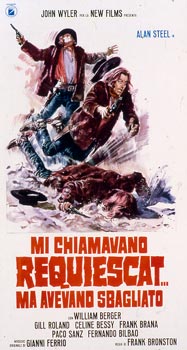 After the civil war, the North American captain Jeff Mulligan falls into the hands of an outlaw, Muchedo, head of an exSouth American gang. To revenge some of his friends that the captain had orded to be hung, Muchedo shoots at the captains hands and leaves him tied to a tree in an abandoned forest, convinced that his death is guaranteed. But Mulligan is found by an Indian woman who saves him. He then looks for Muchedo and, when the outlaw robs a bank, Mulligan without leaving traces is skillful enough to get his hands onto the gold. Muchedo accuses one of his companions, but soon finds out the truth and captures Mulligan. He lets him escape, so that later he would follow him to where Mulligan hid the gold, but the captain isn't fooled and waits for Muchedo and his gang in the first isolated village that he comes to. In the end, he kills them all and has a face-to-face battle with Muchedo who is killed as well.