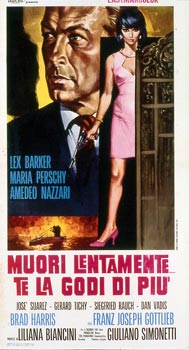 The Italian Mr. Baretti, an introverted and megalomaniac financial operator living in Spain, contrives a diabolical plot to extort a million dollars from the U.S.A. Claiming to have a bomb on his island, he corrupts an American General into changing the shipping cards of a cargo. After stealing a DC 8 jet and seizing a topnotch pilot, Baretti sets a ransom to the Pentagon, threatening to drop a bomb on Washington. On the alert are the secret services, above all the beautiful Lu Forester and the valiant German Bob Urban. It is Bob who finally breaks up Baretti's plans, who through his skillful strategy manages to escape. Bob Urban, in the meantime, takes an extended vacation waiting for another dangerous and difficult mission