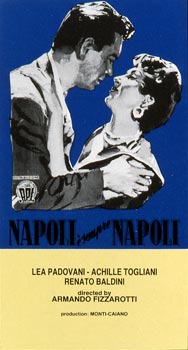 Carmela is in love with Pietro, the fisherman, who loves her, too, but doesn't admit it because he has heard a lot of unpleasant gossip about her. The Tunisian, a dishonest man who is Pietro's rival in business, intends to take advantage of this situation. Filled with hate, he wants to claim Carmela for himself. Meanwhile, Carmela has made a promise that she'll abandon her career as a singer, if the man she loves returns her feelings. In fact, Pietro decides to tell her of the love he feels for her. However, the crafty Tunisian has somehow managed to become Pietro's creditor and is about to take possession of his boat, but Carmela steps in to help. She accepts a singing job and persuades the vicar to pass on to Pietro the money she has earned, pretending it's from an anonymous benefactor. But soon the vicar decides to reveal the truth to Pietro. The Tunisian, free from prison, tries to kill Pietro but he dies in a violent fight instead