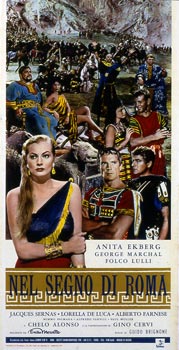 Zenobia, queen of Palmyra rebels against the Emperor Aurelian and with her army succeeds in destroying all his Roman troops. The consul Marco Valerio, sent to Rome, is thrown out and sent to prison for his defeat. Later on with the help of the decurion Giuliano, in love with Betsabea, the keeper of the sacred fire, Marco Valerio is set free and introduced to the Queen Zenobia to whom he offers to enrol at her service. The Queen trusts him, having learnt of the treatment the Romans had reserved for him. Her Prime Minister, at the same time, is setting a plan to have the Kingdom invaded by the Persians and the Queen usurped out of her throne. In the meantime, Marco Valerio and Giuliano kidnap Betsabea and lead the Romans to victory. The Prime Minister is killed by Marco Valerio and later he betrays his Queen and has her put in prison. While Betsabea, the new Queen of Palmyra, will marry Giuliano