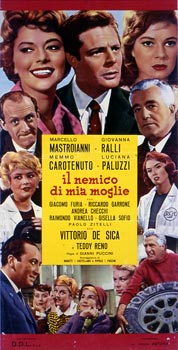 An exciting and enjoyable film about Marco who makes it as a referee against the odds. His wife, Luciana, hates football because she says Marco spends too much time at the game. His father despises it because he always wanted Marco to be a judge. Marco is pushed around by the players who don't like his decisions, and whatever happens he can always rely on being beaten up by half the fans! In short, Marco leads a dog's life, but he loves it. In the climax of the film he makes a dangerous but just decision. Luciana is moved by love and admiration for his courage and rushes into the field to embrace him. His father, too, overwhelmed by his son's sense of justice, follows her to Marco's side. He forgives him for not having studied for the bar - Marco has already proved himself as a judge. The story is enhanced by Mastroianni's remarkable performance