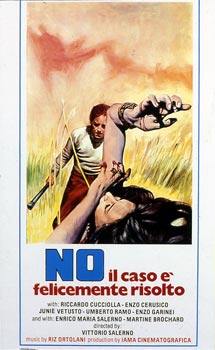 Fabio Santamaria goes fishing one day alone on a lake. There he sees a sadist killing a prostitute. He succeeds in hiding but knows he has been seen. He decides to avoid trouble, and not report the crime. The real killer, an unsuspetable high school teacher, reports his own crime but gives the description of Fabio. Fabio recognizes his own face in the newspaper and panics, making one mistake after the other, worst of which is that of going to the assassin to beg for help. To reassure him, the killer tells Fabio that, should he be arrested, he would pretend not to recognize him. At this point, a priest, a friend of Fabio's, persuades him to tell the truth. But because he had been on the scene of the crime and because of the proof that through his own bungling Fabio had piled against himself, he is arrested, tried, and condemned to life-imprisonment. His sole hope now is that a journalist, who has had a hunch on the truth, may be able to unmask the true criminal