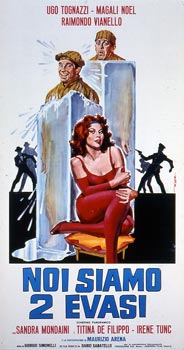 On the night of a fancy-dress ball two convicts escape from jail dressed up in the classic striped outfits. At the same time, their accomplice, a secretary to two insurance executives, persuades her employers to go to the ball dressed as two typical jailbirds. In the middle of the party the lights go out and the two executives are knocked on the head. They wake up in jail some time later feeling rather dazed. They have been mistaken for the escaped prisoners. From here the comedy evolves. While the real fugitives are sauntering about enjoying their freedom, the two executives are being doubly punished for their presumed misdemeanour. But, innocent as they are, they have to stay until the real fugitives are caught