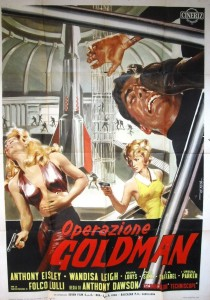 Cape Kennedy's technicians have been very busy working at their project of a space-base on the moon, but so far they have always failed. The Department of State having hinted a sabotage sends Harry Sennet to investigate. He is also to find out about professor Runi's mysterious disappearance. After many dangerous interferences, Harry finds the right track to an underwater base, where the professor is held prisoner by an eccentric millionaire named Rethe, who has planned to place a giant lazer-cannon on the moon to enable him to become dictator of the World. Rethe's dreams are shattered as the professor and Harry destroy the ultra-modern base