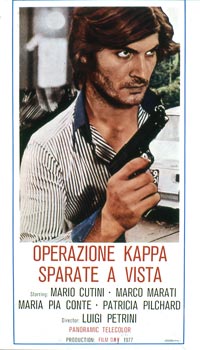 Posh Joe Arbelli, having made friends with yobbo Paolo Soprani, tells him that his girlfriend, Anna, will not let him make love to her. The two young men go to Anna's apartment and rape her leaving a neighbour who'd come to her rescue to die. The two young men are now hunted by the police. They go into a restaurant and there they take fifteen people as hostages. They blackmail Police Inspector Aldobrandi, who has had the building surrounded. They ask him for a million dollars in gold, a car and a plane to get out of the country. The inspector begs for time until dawn of the next day to carry out their orders and meanwhile employs a specialized gunman who he places in a strategic position. In the hours that follow, Paolo softens thanks to the rational words of one of the women, but Joe becomes more fierce. After the death of two of the hostages, Soprani gets shot and dies. Arbelli tries to get away using a girl as shield. But the gunman has already mortally wounded him and Joe is killed, run over by a lorry