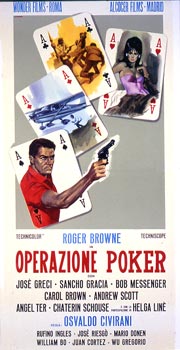 The CIA is investigating the disappearance of an eminent scientist together with his latest invention, a device enabling the human eye to see through objects; and secondly the unclanny luck that a close collaborator of the scientist, John Parker, has been having at the poker table. Glen Forster, a CIA agent is sent to investigate and to protect Yun Tao, a leading vietnamese politician, who disappears after his bodyguards have been sterminated. Forster's investigations take him to Casablanca where he makes contact with another CIA agent, Liz. Here he finds himself at the card table with Parker; as a result he manages to locate and gain possession of the scientist's invention which he immediately takes to Copenhagen where he has heard that Yun Tao is being held. With the help of the device, Forster tracks down the Vietnamese only to find that he is in fact the leader of the band