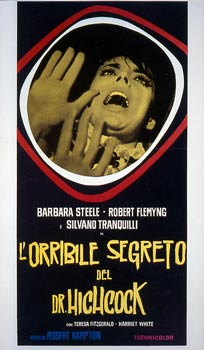 London 1885. Dr. Bernard Hitchcock, a famous doctor, suffers from a split personality and a sexual flaw. During one of his crises, while performing a macabre ritual with his wife, she dies. Grief-stricken, Hitchcock leaves the country only to return many years later with a new young wife, Cynthia. She soon begins to see "apparitions" of the dead wife. Hitchcock does not succeed in calming Cynthia's fears who turns to his assistant for help. The latter accuses the doctor of wanting to kill Cynthia and use her blood in an attempt to rejuvenate his dead wife. In a fight that ensues, a fire destroys the house with Hitchcock and his "dead" wife in it. Cynthia and the assistant are free to start anew