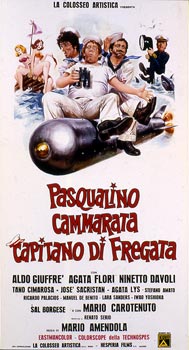 The commander of "the seagull", a tug boat heading for Spain, is a computer which is prone to making mistakes. This, combined with the fact that the crew includes four rather stupid italian sailors, is a sure recipe for disaster. The first blunder they make is to collide with a damaged motor-boat drifting about in the middle of the sea. However, the sailors don't mind at all when they find two beautiful girls on board. Naturally, the girls are invited to join the sailors on "the seagull" while the wrecked motor-boat is towed to Alicante. The four Italians are charming hosts but bad seamen and before the navy arrives to help them out (or should we say "break up the party") they have already managed to wreck "the seagull's" engines