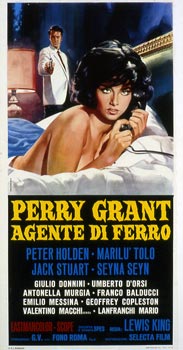 Perry Grant, special agent for the C.I.A. pursues Roland, the couturier, across Rome until he manages to corner him in his home. Roland's real profession is designer of fashionable women's wear - but his creativeness does not stop there. He is also planning to paralyze the country with fiendish inventions of his own design. Roland's genius is not limited to new inventions, he is also a master of appropriating ideas for his own purposes. He has also become a perfect counterfeiter of money. Moreover, Roland has designed an electromagnetic gadget that guides him swiftly through the myriad subterranean paths under the Coliseum when eluding pursuers. But Perry Grant, secret agent, is a worthy adversary in the gadgets' department. Perry's designs to defeat Roland and his devilish contraptions - and his contemptible cohorts - prove successful... Roland and his mob are erased - totally! A totally exciting film