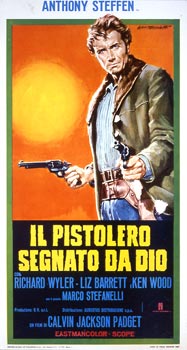 Gary is a young gunman who works in a circus Unseen, he witnesses the killing of some outlaws, carried out by their leader Owl Roy, in order to keep their loot all for himself. Gary is believed to have killed the men, but the admiration he arouses turns to ridicule once he is beaten in a gunfight with Owl. Gary's problem is in fact more serious; he suffers from a complex which blocks him in front of any violence. Because of this he refuses to help Tony, a young boy whose father has been killed by Coleman, one of Owl's men. This Coleman, however, kidnaps both the boy and Gary and promises to set them free only if they show him where the loot is hidden. During their imprisonment, the boy is beaten up by the bandit and, suddenly, Gary is shaken out of his paralysis and attacks the whole band singlehanded. With his new found power, and with the help of his old circus friends, he is able to defeat the vilains and rescue his friend