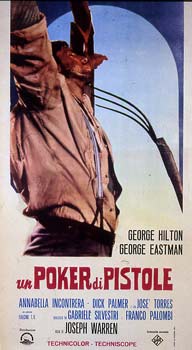 Trying to pay some gambling debts, Lucas and Terrail illegally introduce several fake tokens to be used in the town's saloon. It is soon conflict with the local boss, but with a dangerous "nightly" shooting, our two friends get rid of the criminals! Revealing his identity, Terrail tries to kill his friend Lucas... but the unexpected intervention of a strange Mexican named Lazar saves him in extremis...