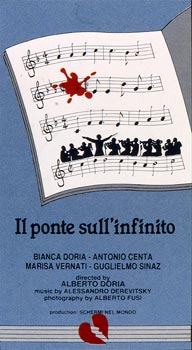 The daughter of a famous composer falls in love with one of her fellow students at the Conservatory where he is studying to become a Director. However, her sentiment is not reciprocated by him so they end their relationship. By chance the boy gains possession of a concert composed by the girl's father entitled "Il ponte sull'infinito" and, as the father is no longer alive and his house has been destroyed by fire, the boy pretends that he has composed it himself. It meets with a great success and he becomes a world famous celebrity on the strength of it. On returning to his home town he is proud to direct "Il ponte sull'infinito" for his ex-school friends. Among them is his ex-girlfriend who immediately recognizes her father's work as she had helped him to write it. To his amazement, she publicly accuses the dishonest musician of fraud