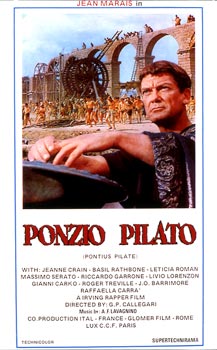 Pontius Pilate is named governor of Judea. The region is torn by political and racial uprisings led by Barabbas. At the same time, the multitudes flock to hear the words of Jesus. Barabbas is captured by the Romans. Shortly after Jesus rides into Jerusalem, but he is captured and brought for trial. The crowd demands that Jesus be crucified in place of Barabbas. Pilate must make the decision. He considers Jesus a just man, but, not wanting to cause further uprisings, he calls for a bowl of water and symbolically washes his hands of the matter. Jesus is led to Calvary and crucified. The sky darkens and in the earthquake that follows Pilate's children die