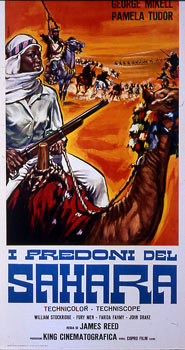 The well-known archaeologist Flatters disappears during an expedition in the desert organized by the adventurer Wayne, the only survivor. In a second mission with the professor's son, the group is captured by Arab bandits in search of a hidden treasury... but Wayne's courage and ability save the situation! After killing their ruthless leader, El Malek, he proves his honesty and is rewarded by... the sincere love of the professor's beautiful daughter