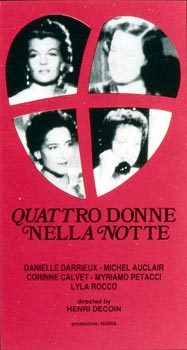 Having been poor in his youth, Larry Roques succeeds in becoming a journalist: he had sworn to himself to become wealthy at all costs and now he is a successful man. Journalism is only a cover-up for his very profitable wealings and dealings. Larry has bought an expensive apartment and invites four ladies for a house warming party. Constance, his first wife. Maggie, his mistress, who often helps him in his fishy doings. Cecile, rich heiress who Larry has decided to marry. The fourth guest is Vera, who wants a very high price to give him a divorce. The evening goes by in a very tense atmosphere; Larry has decided to get rid of Vera. The railing of the high terrace is unstable and it will only need a little push to make the victim fall off. But Vera escapes the attempt of murder Larry, exasperated, tries to push Constance off the terrace because she is nagging him but the woman moves away and Larry falls, killing himself