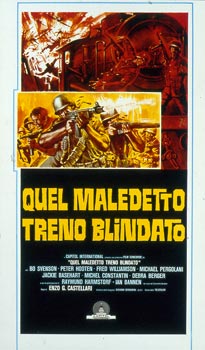 A quick, exciting film full of action. The setting is the Ardenne mountains during World War II. During a bombing, five prisoners get a chance to escape from the prison in which they are held. They are: a negro, a gangster, a pettythief, the very shy Tony and Lieutenant Robert who takes charge. Their destination is Switzerland and freedom. After various adventures they meet a German deserted Captain who joins them. Along the road they destroy a German patrol which was not really German but a group of American agents on a mission. The party is caught by the partisans, who force them into carrying out the mission themselves. The mission consists in removing a nuclear workhead from a train and then blowing it up as it crosses a certain bridge