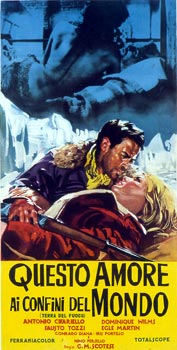 Claudio, a rich cattle breeder, takes his young bride, Françoise, to the "Tierra del fuego". The woman, however, has trouble in adapting to the new life on the desert land. What's more, she is hated by Mecha, who has been Claudio's mistress. During a party in honor of the bride and groom, Françoise meets Walter and is struck by him. Mecha, too, has her eyes on Walter, who, however, loves the "estancia", convinced he will never return. Instead, he comes back the next winter and an irresistible love blooms between him and Françoise. Both think it better to leave one another, and once more Walter leaves. Until one day, while Françoise is on her way to a ferry to meet her husband, Walter joins her and begs her to follow him. They try to escape to Chile, while Claudio and Mecha chase them. On the border, Mecha shoots and injures Walter. But the two lovers succeed in escaping, while Claudio watches them disappear in the fog