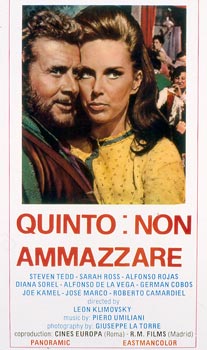 Six bandits rob a bank and kill all its employees. The whole town is on their trail and don Vincent is caught and hung. A bounty-hunter who passes by offers to catch the gangsters and return the loot against a 10,000$ reward. In the meantime, the bandits reach their hideout but the loot has disappeared. They move to an inn in the desert to find out who of them has taken the money. At the inn young Bill becomes their slave, timid and dominated by the outlaws until the bounty killer, ex-colonel and fake outlaw, teaches him how to use a pistol. Together they go about killing the gunmen but their task becomes much easier because the bandits start eliminating each other. As the ex-Colonel faces the leader of the gang, Blake, a shot goes off, reaches Blake's saddle and the stolen money comes pouring out. Kate, shocked at being betrayed, shoots Blake just before getting shot herself