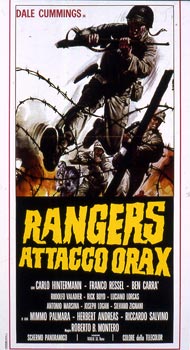 The film is situated in a prisoner-of-war camp where Col. Davenport and his men have almost finished an escape tunnel which they have dug with their bare hands. But at the crucial moment, another American is caught and imprisoned, a major Higginson, who has been captured on purpose, sent by his superiors to destroy an atomic research plant which is just next to the prison grounds. Major Higginson orders Col. Davenport to help him in his mission, for the sake of their country. So, the mission is carried out brilliantly, even though the two men are worst enemies. But as they are returning through the escape tunnel they hear the roll-call, calling out the prisoners' names. They realize straight away that they will be foundout. At this point Davenport throws himself on the electic wire dying instantly in order to distract the German's attention and thus save Higginson's and his men's life