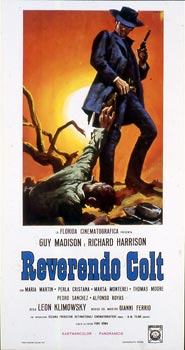 Reverend Miller arrives in Tucson where he wants to build a church. But on the very day of his arrival a gang carries out a raid on the bank and the people of Tucson, who are suspicious of the new reverend because he carries a gun and immediately blame him for the robbery. The sheriff saves him from lynching by putting him in jail. Then he asks the priest to find the gang and the booty; thus Miller becomes the Reverend Colt. His exceptional skill means that he can shoot hats off people's heads and their pistols from their pockets, but he never kills. At the end, thanks to the engeniousness of the priest, the sheriff manages to arrest the gang, thus the Reverend Colt gains general approval and is able to start building his church