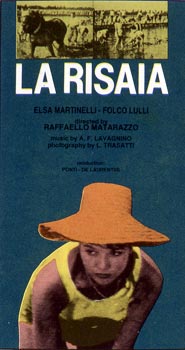 Peter, who owns a plantation, discovers that among his workers is Elen, his real daughter, born after his relationship with a woman he had abandoned shortly after having seduced her. Peter is too embarrassed to tell her the truth so he tries to help her but the interest he shows towards the girl is badly interpreted by his nephew, Mario. Elen falls in love with a mechanic named Gianni, and Peter offers him a good position but Gianni believes there is something between Elen and Peter because of his kindness. At the end of the harvest before returning home, the workers give a big party, but Elen who is tired returns to her room followed by Mario who tries to rape her. In the meantime Peter has explained everything to Gianni. Far away they hear Elen's screams, they rush to her room and Mario, taken by surprise, falls, bangs his head and dies. Peter tells the girl the truth and pleads quilty to Mario's death leaving the youngsters free to marry happily