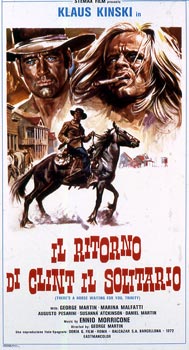 After five years as a fugitive, Clint Murrayson returns home. He has a price on his head of $ 5,000 because he has killed a man and his wife knows, but for the love of their daughter she accepts him back on the farm as a worker. She sets one condition on him that he must never again use a gun. A powerful speculator named Scranton, tries with the help of bullying outlaws, to kick out all the small farm owners from the valley, including Clint's wife. Clint is forced to look on is injustice powerless because of the deal he made with his wife, and because he is hunted by a bounty killer and cannot afford to attract attention. One day, the bandits decide to get rid of the farmers once and for all, and they publicly hang an innocent man. Clint can put up with this no longer, and he picks up his guns and destroys the gang. The bounty hunter witnesses the scene of justice and renounces to Clint's ransom