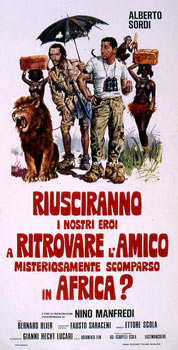 Alberto Sordi, head of a rich Roman family, travels to Africa to find his mysteriously disappeared brother-in-law Nino Manfredi. Comic, pathetic and incredible adventures will take him throughout the hot continent... where Nino is finally found! Not at all lost, he had rationally decided to remain among the "primitives" instead of returning to the civilized world! A cast of the best Italian comic actors excellently directed by Ettore Scola.