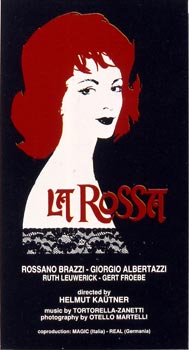 Francisca, tired of living between a husband and a lover, abandons both and runs away to Venice. The woman accidentally meets two men: one is Fabio, a writer, the other is Patrick, a rich Englishman who lives on his yacht. Francisca soon enough finds herself mixed up in Patrick's troubled existence; he was a secret agent in the Intelligence service during the war, and had been captured by the Nazis. Kramer, one of the heads of the German counterespionnage had convinced him to betray the cause and become his "confident". This fact had become well-known after the war and Patrick had been expelled from his country. He is now in Venice to square up with Kramer who believes to be safe. Using Francisca as a bait, he attracts Kramer on his yacht and kills him. Now he would like the woman to stay with him, but Francisca is shocked by what she has seen and leaves alone. In vain Fabio tries to stop her