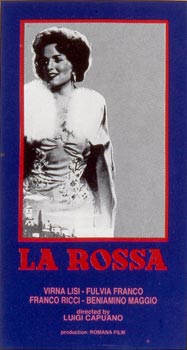 An electrical story of love and meanness that lead innocent people to the brink. Amalia, the redhead, returns to her little home town on the Amalfi coast pretending that she has married a wealthy man. The truth is: she and her lover, Pierre, have committed a theft and are on the run from the police. Her former home-town sweetheart, Salvatore, is now a married man, but Amalia plays up to him because she needs to use his fishing boat to escape across the bay. Salvatore, a happyily married man, knows Amalia too well to be taken in by her play-acting, but promises to take her and her lover only because he believes Pierre to be a political refugee. However, Salvatore backs out when the lighthouse keeper tells him the truth about Amalia. Afraid that Salvatore knows too much and will talk, she tries to kill him by turning off the lighthouse signals and having him smash on the rocks. But the lighthouse keeper catches her in the act. In the tussle which follows she falls over the railing to the rocks below. As she is dying, she releases the keeper from all blame - claiming that her fall was accidental