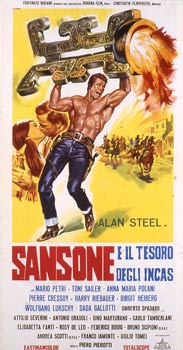 Alan Fox is being taken to Silver City to be tried for the murder of old Nixon, Janet's father. On the way the coach is attacked by a group of bandits headed by the real murderer: Jerry Damon. During the fight, Alan and a young Indian manage to escape. Samson, an old friend of Alan's, is convinced Alan has been killed and swears to revenge his death. Damon makes another attempt on Alan's life before heading-off to the Palladi mountains in search of the golden treasure of the Incas. He is pursued by Samson and his group of followers who massacre both him and his entourage. However, trouble is just around the corner, as Samson, Alan and company are taken prisoner by the Incas, who intend to offer them up to the Gods. Mysia, their queen, tries to save them from the sacrificial altar but in the attempt is herself condemned to death. However, once again Samson, saves the day by destroying the Incas' temple with his bare hands. Mysia escapes with Alan and becomes his wife, while Samson marries Janet