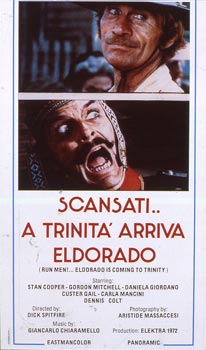 Two friends, after having escaped the anger of the inhabitants of a little town for having hawked a bogus miracle cure, decide to try their luck at cards. It is only after a game played with a couple of card sharpes that they decide to rob a rich and rather bizarre man called Eldorado. They enlist the help of Ringo (a famous bandit) and put their plan into action. Carter, one of the two friends, on one side, and Ringo on the other, to keep Eldorado's friends occupied while Duke and his girlfriend rob him. With the robbery over, Carter, Duke and the girl decide to escape together leaving Ringo behind. The latter follows them, however, and soon comes upon their horses and the sacks of gold. One of the sacks is open. He plunges in a hand and takes out a... stick of dynamite, which explodes. Meanwhile, in a saloon, Carter and Duke are paying poker. When one of the players asks to see the cards, the four men disclose...sixteen aces!