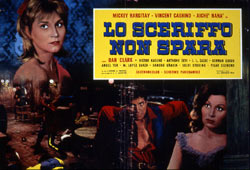 Fast gunman Jim decides not to use his weapon ever again, after having killed his own father by mistake! After he has been appointed sheriff, our hero is soon worried by a dangerous band of outlaws interested in the local bank's money! In love with the banker's pretty daughter, Jim recovers the booty for which the criminals have killed one another. Once this mission is achieved, he decides to leave this dangerous town and settle in a quieter area with the woman of his dreams.