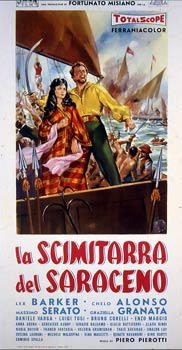 High adventure in a colourful period when pirates raided the treasure-laden cities on the coasts of Italy and Spain and crossed lethal and glittering swords with noblemen and their royal guards. Dragut, the pirate, raids Rodi and steals both valuable documents and the governor's daughter. The governor, in turn, releases from prison a reknowued swordsman, Drago, and sends him after the pirate, to save his daughter and the documents. The rest of the story is replete with che clash of steel and adventure as Drago fulfills his mission and...falls in love with the kdnapped daughter