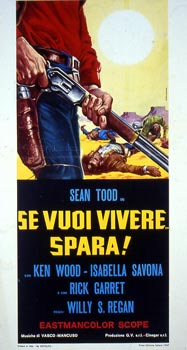 The grim, lawless side of frontier life is the theme of this exciting Western. A young cowboy, Johnny, playing poker in a saloon, discovers he is being cheated. He accuses the cheater who instantly gets on his feet and draws his gun... but, Johnny's gun's faster. The cowboy takes quick leave as he is accused of murder and a reward for his capture is posted. Bounty hunters, eager to pocket the money, are after him. He finds refuge on a ranch with a family named McGowan and falls in love with Sally, the beautiful daughter. Johnny, constantly on the run, leaves the ranch so that the McGowans won't be involved. While he is away, a gang of Mexicans kills the McGowan family except for Sally, who manages to escape and find Johnny. Marlowe is the istigator of the massacre in order to be able to claim the ranch. Johnny, his partner Donovan, and Sally find Marlowe's gang and side by side they fight the opposition to a standstill