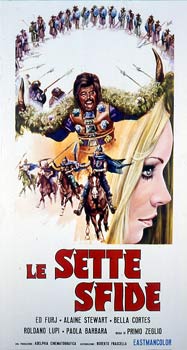 According to the Great Khan, Ivan and Amok must put an end to their tribes' war with a complicated wrestling match: the two leaders will represent their entire people... but when Ivan is about to win, dishonest Amok cheats and a huge riot explodes! The Khan is also involved and Amok spreads death and destruction. After a lot of blood shed and sorrow, Ivan wins but... having lost the love of his life, he leaves the reign in the hands of his brother, Kir.