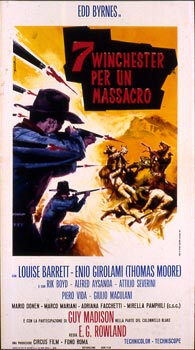 Texas, 1867. Blake, an ex-confederate colonel, has turned to looting and sacking the country with his gang. Stuart, having saved one of his men from the Federals, seeks out the colonel in his Mexican hideout and suggests that they go in search of a large sum of money of which he alone knows the where-about. After all sorts of adventures, during which they are joined by Manuela, the group stops near the village where, according to Stuart, the money is hidden in an old Comanche grave-yard. Unbeknown to Blake, Stuart and the local Sheriff have agreed to capture him and his gang on whose heads a large sum has been laid. However, Blake kills the Sheriff and his men, tortures Stuart, and goes to the Indian grave-yard. Manuela comes to Stuart's rescue and together they kill all of Blake's men among the indian graves. Stuart and Manuela are not confederates, but simply bounty killers; so they pocket the reward and ride off