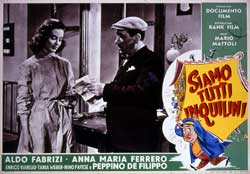 Anna has inherited the apartment she lives in but, not being able to keep up with the expenses, owes a great deal of money to the administrator. The latter being a dishonest man, he is trying to make the naive Anna believe that he has the right to take the apartment away from her if she does not pay! The intervention of janitor Lorenzo and the lawyer next door save her from fraud. Renting the empty rooms, she will also find the money to marry her beloved boyfriend.