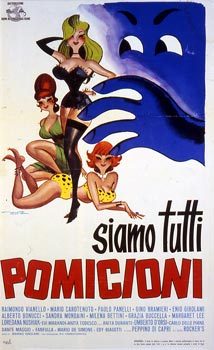 A comical research on the true or false reputation of Italian men as "latin lovers", divided in four episodes: 1) Ennio, a corporal truck driver, manages to have a love-affair with the wife of an English Nato colonel, thanks to the complicity of his fellow soldiers and the simplemindedness of his superiors. 2) Mario meets a girl and would like to become her lover, but his own mother, having met the girl, will do everything to make him marry her. 3) Ciccio and Salvatore, two Sicilian men, are in Rome with their wives for a religious pilgrimage; they manage to escape their strict control but all sorts of incidents spoil their plans completely. 4) Floro is caught by his wife in the company of his mistress; a salesman of electrical appliances helps him out of this scrape but blackmails him into buying all his products