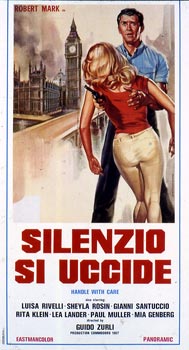 Secret agent Mark Robin jets about from one European capital to another, making enquiries about some mysterious arms dealings. Through sheer luck, he escapes an assassination attempt and then heads for Tunisia to follow up an interesting clue. Whilst in the house of a botanical scientist, he emerges unscathed from yet another attempt on his life, but remains helpless whilst Diana, the scientist's daughter, is kidnapped by Maude, the number two weapon dealer. Mark, eventually, kills Maude and frees Diana. He then seeks out the smugglers, who are hard at work in their base: a cave flanking the rocky coast by the scientist's villa. With the help of some scuba-divers, Mark kills them all, including Thekotis, their leader. However, he then realises that he has played right into Diana's hands, because she has been planning to take over the arms dealings all along. For the third time, Mark's life is threatened, but this time he is rescued by two under-cover soviet agents who have been working in Diana's house