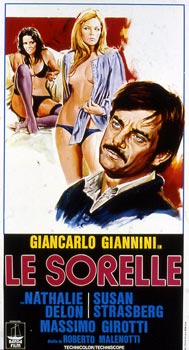 Diana, who has a morbid love for her sister Marta, decides to pay her a visit. Marta is married to Alex who is very affectionate but who doesn't fully satisfy Marta who falls in the arms of another man whom she secretly meets in a hut, and who she hopes will give her new emotions. Taking advantage of the situation, Diana tries to steal back the morbid love she had from her sister before her marriage. This fact absorbs her so much that she does not even notice the attention that Dario, Alex's cousin, is giving her. Alex realizes the situation and decides to go away for some time with Dario so that the two women can express their feeling towards each other quite freely, but Marta rejects the idea of turning back to the past from which life with Alex had freed her. Diana, in despair and deeply in love with Marta, at such a refusal decides to kill her. Beautiful photography and very refined settings