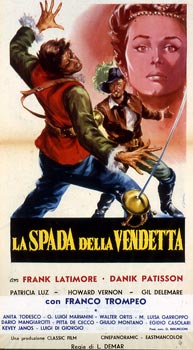 It is 1625, the city of Casale has been lain to siege by the governor of Milan, Don Gonzale of Cordova. It is, however, the grasping and obsequious vice-governor who is terrorising the population, trying to worm his way into the favour of the Spanish forces. Diana, however, is spared his tyranny; her noble blood and considerable inheritance make her an ideal marriage proposition for the vice-governor, who solicits the help of her sister, Elisabetta, to engineer the marriage. However, Diana is fated to love another, the soldier Marco. He attacks the vice-governor, but in the violent clash that follows his beloved Diana is mortally wounded. Stricken with grief and anger, Marco sets his heart on revenge, and after many actionpacked scenes he finally runs the vice-governor to ground and kills him. The film ends most happily with Marco's wedding to Maria Dolores, a young girl who reminds him of Diana