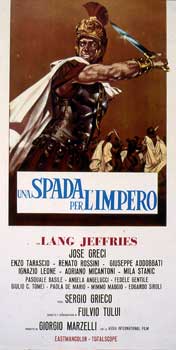 190 A.D. - Consul Marco returns to Rome with his beloved slave, Nissia, from an excursion in a far corner of the Empire. Nissia is first kidnapped by Emperor Commodo, but freed by Marco and then hidden in the catacombs... In Rome after a short absence, Marco finds the city terrorized by a cruel persecution against the Christians ordered by the Emperor: in a long and violent conflict Commodo and his followers are killed and Nissia saved for the second time... The new Emperor Pertinace finally gives Rome the peace it deserves!