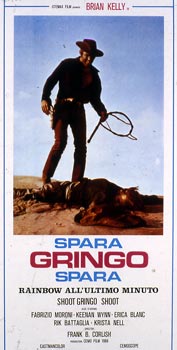 An insight into the cruel judgements enacted on those who do not play by the rules and patterns set out by the morals of a community. Don Francisco Quintara, a rich Mexican landowner, hires a tough gunman, Stark, to bring back his son who has joined up with a gang of American outlaws. Stark is successful in bringing back the son, but is startled when he sees that Don Francisco's welcome to his son is not a fatherly one. Don Francisco has instead prepared a cross of St. Andrew's on which he plans to crucify the young man because he has learnt that the son is actually a secret illegitimate child of his wife and he will punish both by killing the young man in front of his mother. Stark, hard though he is, won't let this happen. Fast guns speak for justice here - Don Francisco, his wife, and others lie dead. In the end Stark and the son ride off to start life anew. Excellent drama!